Roller skating has been an activity enjoyed by millions of people across the world for years with random booms in popularity bringing new trends or styles of skating to the forefront of peoples social lives.

So if you are planning on heading to a rink but want to know what types of roller skating are available to you, read on and find out how you can have different types of fun on wheels!

Artistic skating may not be one that always comes to mind when you first think about gliding round a local skating rink but it is a very popular form of skating. Particularly in events. Normally done using quad skates, some events give inline skates a preference. Artistic skating is popular in America with local, regional, national and world championships.

Within artistic skating there are several variations, some that may be more well known than others. Some you may even do yourself every now and then!

Maybe for some this could relate to the ever popular roller disco but in terms of events, it is a little different. People that enjoy dance skating may enter events or competitions as solo dance or team dance.

In solo dance skating, dances are set  patterns and competitors will be judged on the skill and fluidity of turns, edges and how neat the presentation is. Further to this, the accuracy of steps is also noted to help judges score.

Ages competing in dance skating vary and in most instances, competitions are set to age and ability categories.

If the event is a team dance competition, two people of similar ages and ability will compete against other teams in the set dances and be judged the same as those competing in solo events.

Freestyle skating gives the skater a bit more free reign on the rink and is more of a physical movement than other artistic skating. Events can be entered singularly or in teams. Whilst the impetus is on freestyling and the dances being largely improvised, some may have a loose amount of choreography to enable an outline to the freestyle.

A highly skilled form of dance skating where teamwork really pays off. Patterns and movements are conducted to music and precise choreography is key to being successful. Teams can range from 6-15 people which would be categorised as a small team or 16-30 people classed as big groups. Judged on the ability to skate together rather than the level of jumps, spins and speed, this form of artistic skating requires a lot of practise to master.

Speed skating isn’t available at many rinks but is often seen both indoors and out. During the late 1940s it rapidly gained popularity and in the USA, just like with artistic skating,it began to spawn regional, national and international competitions. Entered as a single, doubles or quads competition, it can be sometimes found taking place on a velodrome. Inline speed skating remains popular and can be seen on TV channels across the globe.

Inline skating rose to popularity in the 80’s and 90’s and is more commonly seen in skate parks or streets. It tends to showcase extreme flips and spins. Normally performed using modified skates that have a grind block between two wheels and boots that are extra durable.

To perform this type of skating mini ramps, verts or bowls are commonly used, however skaters will also use the natural street surface to act as an aide to perform the tricks they want to do. Those that enjoy this type of skating will often opt for smaller, harder wheels in order to give a preference to speed and reduce wheel bite.

Roller hockey is hugely popular and was actually a demonstration rollersport in the 1992 Barcelona Olympics. It has been played since the 19th century and is enjoyed across the world. Players will use inline or quad skates and choose either a ball or a puck as the item needed to score a goal with. A full contact sport, you could say it  is the on wheels equivalent of ice hockey. In England there are currently 9 teams in the Roller Hockey Premier League. A 5 a side game, with 4 outfield players and 1 goalkeeper, it is a game full of speed, action and aggression.

Roller derby is another team game played on skates. In the early 2000’s the sport saw a revival or sorts that bought about 5-a-side sport played mainly by women. It was first played in 1935 and is now enjoyed by players in approximately 1250 amateur leagues across the world. 15 players are on the roster at any time with 5 on the playing surface. Played indoors on an oval, there are some leagues that still play the way the game originated back in the 30’s on a banked track. Points are scored by the player designated the position of jammer lapping the blockers from the other team.

Whatever type of roller skating you are interested in, you can get your practise in at The REC Rink. Whilst we don’t have hockey or derby teams, our large rink gives you the perfect opportunity to hone those skating skills ready for when you need to unleash them. Maybe you just want to enhance your speed skating or feel that artistic skating is more your vibe. Whatever you prefer, come and give it a try with us. Book today to get your session guaranteed! 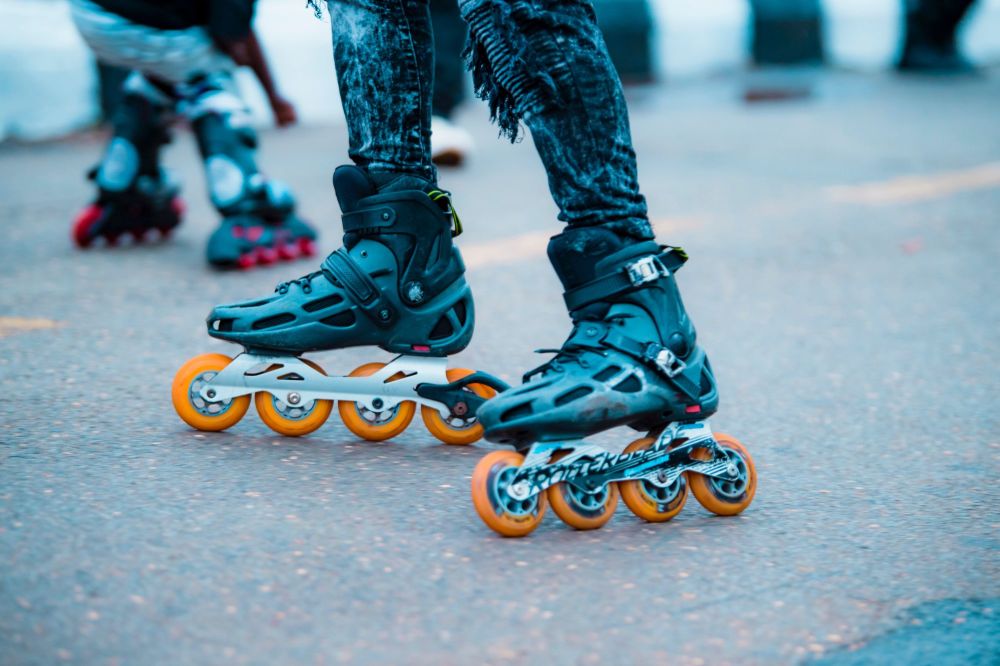